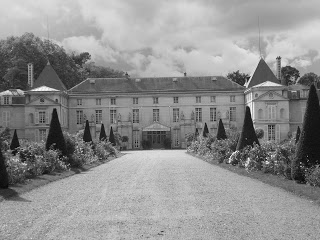 Many tourists traveling to Paris look for a dose of sugar coated history by heading to the Palace of Versailles or the Palace of Fontainebleau. Both famous residences are dripping with opulent eye candy, but there is a hidden gem waiting patiently to be unwrapped by those interested in the private residence of one of Frances’ most famous couples. Malmaison, the country home of the Emperor and Empress of France, Napoleon and Josephine Bonaparte.

Walking up to the chateau you’re consumed with aisles of roses and cone shaped topiaries. Even on the rain soaked day I arrived, the roses brought life to the surroundings. At its height, there were 250 different varieties of roses planted by the Empress and her gardeners. To say Josephine loved flowers is an understatement. It seems fitting the Empresses’ middle name would be Rose. Thirty years after the Empress’ death, a Russian Grand Duke named a rose in honor of Josephine called, “Souvenir de la Malmaison.”  Today there are several floral scented perfumes bearing the Empress’s name.

Walking into the home felt oddly comfortable. It felt lived in. Computers and telephones were replaced with writing desks and books. While much of the original furniture was auctioned off after Josephine’s death in 1814, the house is filled with period pieces, some original and many brought over from the apartment she and Napoleon had in the Tuileries Palace. Every room holds reminders of the famous residents, like the Imperial bumblebee and eagle, the monogrammed letters “J” and “N” and their numerous portraits. Most of the paintings on the walls are from the Empresses’ private collection. Many were given to her as gifts from Napoleon. Napoleon Crossing the Alps, by Jacques- Louis David resides within Malmaison. Originally commissioned by Charles IV, king of Spain to symbolize unity between the two countries, Napoleon was so touched by the king’s gesture, he requested three additional versions. There are details that may be missed at first glance, like the rocks in the lower left corner. If you look closely, you’ll see the names of Hannibal and KAROLVS MAGNVS IMP (Charlemagne), two other generals that crossed the Alps previous to Napoleon. This painting is a wonderful representation of how Napoleon viewed himself, larger than life.

Napoleon’s mahogany study is a bibliophile’s dream. At one time there were over 40,000 leather bound books lining the walls. More than 500 have been found and placed back upon the shelves. The original volumes bear the embossed emblem, “BP” for Bonaparte. Hidden behind mirrors is a private staircase leading up to the Emperor’s apartment. Everything in the study is scholarly, like the paintings of Homer and Voltaire and the medallions of Apollo and Minerva. Even after the couple’s divorce in 1809, Josephine was adamant nothing change in her husband’s study.

Upstairs I found myself at a standstill within the Empress’s Bedchamber. The room mimics a luxurious tent. Rich ruby red fabrics drape the walls. The focal point is a golden canopy bed topped with the Imperial eagle. It was here Josephine took her last breath in 1814, four days after catching a cold while on a walk in the gardens of Malmaison with the Tsar of Russia. It’s said her last whisper before dying was, “Bonaparte.”  Napoleon was in exile when Josephine died, but chose to visit Malmaison for two days after his escape from Elba. Even though no longer married, he wanted to pay respect to the memory of his first wife (and love) before embarking on another military campaign, Waterloo.

Unfortunately the second floor was closed when I toured Malmaison. Had it been open I would have seen an assortment of clothing worn not only by the Empress, but also original pieces from her court’s attire. The second floor also has the “Train Room”, a space dedicated to the lavishly long robes worn by Josephine. Documented inventory shows the Empress at one time had 49 elaborate trains. She was known to select the colors for her train based solely on the furniture and wall coverings of the area she was attending.  Josephine was often scolded by Napoleon when they were married because she was notorious for splurging on extravagance.

The “Carriage Pavilion” on the grounds of Malmaison shouldn’t be missed. There are two pieces of history hidden inside: a remnant on wheels from the Battle of Waterloo, the carriage used by the Emperor, seized by the Prussian army on June 18th, 1815 and the hearse used on St. Helena for the Emperor’s funeral.

Before leaving my daughter pointed out something interesting back in the main house. She guided me to a beautiful painting just off the entrance. It wasn’t the painting’s beauty that caught her eye; it was the
location, perched on an easel in the corner of the room. What made the painting spectacular was the fact this family portrait stood exactly where it was painted. You could see the fireplace in the background, the ornately painted walls, and the gold and crystal chandelier hanging above. With the exception of the human subjects, over 200 years later…nothing had changed in the room.

The roses Josephine and her gardeners planted on the grounds of Malmaison over 200 years ago are alive and thriving, like the memory of Napoleon & Josephine.