She Only Planted Purple Flowers 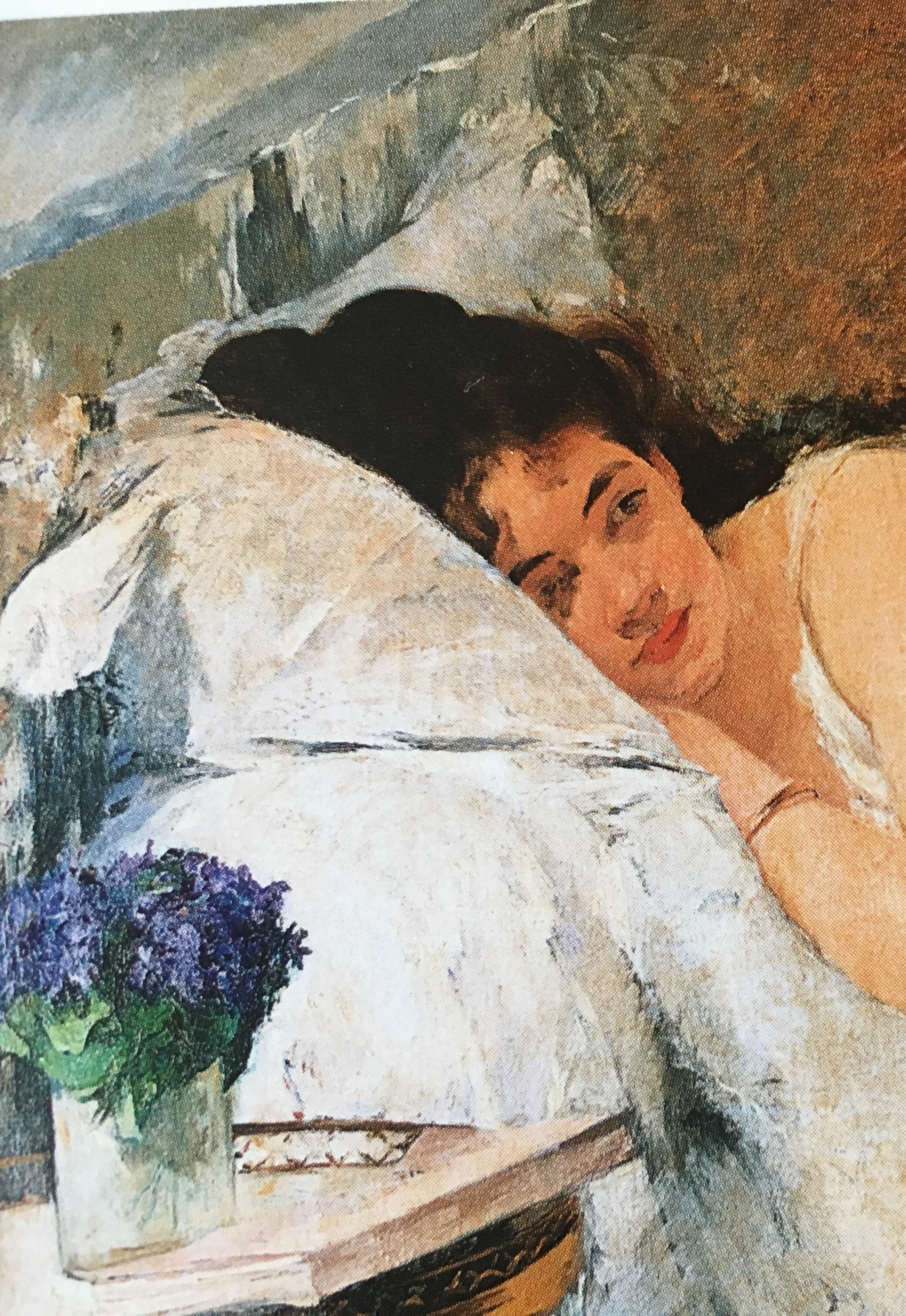 I fell in love with 21 kindergarteners before I could remember their names. And the feeling was mutual. While the teacher began her day in the back of the room on the computer, the first fifteen minutes of my day began with one question of my choice, each student was given an opportunity to answer. These moments allowed me to peek into their minds.  I learned who hates broccoli and loves sushi, who had lost a tooth the night before, who they dreamed of sharing a popsicle with: Taylor Swift, a deceased family dog and Martin Luther King Jr. and one quietly responded, “My grandparents in Kansas.” I learned about fears. One boy shared how scared he was meeting his baby sister for the first time. I asked why this scared him? His eyebrows raised, genuinely surprised I didn’t know – “Because, what if she doesn’t like me?” Another student shared with classmates, “I’m scared my baby sister will go into the ocean and the sea will swallow her up and take her away.” The beginning of our days were honest, funny, at times heartbreaking and they were always –  genuine.

Before agreeing to be Ms. X’s substitute teacher’s aide until the end of the year (just over two months)  I was warned, “No one stays. She’s already been through four aides, this year!” When others described the teacher I’d be working with three words were on high rotation: mean, scream, and cry.

I took the inability of others to stay as a challenge. I was different. I reminded myself, it’s only a few months. Convinced, if I could make her life easier in the classroom, by extension I’d be improving the kids’ end-of-year, too. Added bonus: I love kids and the income would be nice.  It was a win win. Or so I thought.

The teacher only planted purple flowers.  Only hues complementary to her fair complexion were allowed in her wardrobe: magenta, turquoise and emerald green; she wore them with brilliance.  She dreamed of becoming a professional alligator wrestler – like the ones she’d seen in Florida. And if she could enjoy a meal with anyone it would be, “Bocelli.”  With confidence, poise and sureness mixed with a cautious dose of longing she explained, “because I just love the feeling I get from his music. It’s beautiful, just beautiful!”

Ms. X’s unfiltered thoughts, wit and dark sense of humor were a highlight to my morning, endearing even.  I laughed the chilly day she complained, “Why can any idiot in the state of California light a match and destroy a 1000 acres of forest, but I can’t light a damn fire starter for my fire-pit?”

I’m certain if the palms of her hands were allowed to blossom, you’d find four embedded lines where lavender manicured nails reside, eternally clinched.  I learned certain elements set her fuse aflame causing a manic eruption: being interrupted, sounds of crying, whining, anyone hurting nature, lying and rule breakers. The students who displayed any of these behaviors were scorned with tongue lashings accentuated by a furrowed brow and piercing eyes that dared anyone to challenge her authority.  All kindergartners who betrayed the above were told, “You have no Integrity and you will never get far in life! People without Integrity are useless to society…you are useless!”

It wasn’t fair for me to hope the teacher would like me.  The day we first met I told her I was excited to be her sidekick.  She looked up from her desk and chuckled at my naivety and announced, “I don’t need help.  I’ve never needed help. I can do everything on my own, and most likely better than if I’d had help.” Her cut throat honesty was refreshing, at least when it was directed at me.

On my first day I witnessed her slowly steal the light and confidence from a little girl because she didn’t know the answer to a question.  She commanded her to stand, surrounded by her classmates for ten minutes while she gazed down upon a head topped with braids and ribbons yelling, “Explain to your classmates why you don’t know the answer?”  The girl repeatedly whispered, “I don’t know”, which caused more fury. Raising her voice, the teacher continued, “Because you don’t listen that’s why you can’t answer the question! You’re going to grow up being one of those people who walk behind horses picking up poop for the rest of your life!” Ten minutes of this banter was a long time, especially for a five year old.  But it didn’t end there, the teacher went on to tell the girl to move away from her classmates and stand alone near the door of the class – which the girl did, for 20 additional minutes – until it was time to leave for Spanish.

I found myself making excuses for Ms. X’s less than becoming behavior with the kids: she’s a type one diabetic (it’s not her fault, her mood is affected by low blood sugar).  My first week in class when she fell asleep in a chair during a Max and Ruby episode I passed it off, along with the time in the library, must be hard nearing retirement and keeping up with 21 kindergartners. When other teachers called the classroom on multiple occasions to remind her she’d forgotten to send the kids to specials, I excused it because of her tenure and I began reminding myself daily that as demanding as she was on the kids, imagine how hard she must be on herself.   I felt sorry for her.

On my (unplanned) last day I witnessed her yell at a doe-eyed boy because she was angry he was sitting outside of his designated square on the carpet.  She scolded him in front of his classmates, “You look like an ape without a brain in its body!”  Moments later the teacher told me she was keeping a handful of students inside for a reading test. She told me to take the rest of the kids outside. We were sent out in the rain, for an hour.  Looking at the wet clothes clinging to their bodies, I peered inside our classroom and saw one child standing on a chair and others running around, unsupervised.

Unlocking the door to our classroom, I found myself shuffling drenched kids in from the playground and directing them to sit on the area rug, the same rug where we had our beautiful morning discussions.

I grabbed the teacher by the arm and pulled her into the kitchen connected to our classroom, closed the door and did what she’d taught on countless occasions.  I yelled, and I scorned her.  Like her 21 students, I’d listened to Ms. X’s screaming monologues for two months about honesty and integrity and how her classroom and the world had no place for people who didn’t show these qualities.  Integrity, “the quality of being honest and having strong moral principles.” I’d lost my way.  Maybe it was the rain, but it became clear, her teachings were a contradiction to her behavior.

And then, I left.

My heart ached as students asked with panic, “Ms. Judy, where are you going? It’s not your lunch yet? Why are you going? Are you coming back?” I knew wouldn’t, I couldn’t.

After reporting to the Principal what I’d done, I was asked to write a formal report.  I drove home to write everything I’d seen over the course of two months. There were three pages. The following day I was told the teacher didn’t show up for work. She was placed on “administrative leave” and under investigation.

I began to disperse my report like a parade tosses candy, with abandon.  My goal: I wanted others to have accountability, too. And I wanted to make certain this teacher would not return to a classroom.  Since my filing, at least five other reports were handed in by other aides and parents.

As the school year came to a close, I was reassured by administrators there were “processes” and that I was overstepping my boundaries as a substitute teacher’s aide.  I was told I was creating a “mob effect” among parents and that I was hurting, not helping the “process.” So I became quiet, for three months.

As the summer came to a close a new batch of wide-eyed kindergartners were eagerly anticipating their first day of school.  They, like me would see Ms. X’s name on a piece of paper with 17 students.  I’m struck by guilt because of the decision I made to listen to the adults who assured me to wait for a “process” that never came.

The teacher who only planted purple flowers schooled me.  She taught me to yell, and sadly I was reminded not all adults can be trusted. I can only imagine what the kindergartners learned.  And it turns out Ms. X was wrong the day she told me she didn’t need help.  She does, and I hope she gets it.

UPDATE: A year after this post, Jennifer H. Svan of the Stars and Stripes wrote a feature article about abuse w/in DoDEA. (The bit referencing the above teacher is the last paragraph, article HERE.) DoDEA never contacted any of the individuals who filed reports of abuse.  And the teacher who only planted purple flowers kept her job. My husband and I removed our girls from DoDEA and enrolled them into an international school.)

I created a survey asking parents/students/teachers a series of questions about their DoDEA experience, the results are HERE.

3 thoughts on “She Only Planted Purple Flowers”