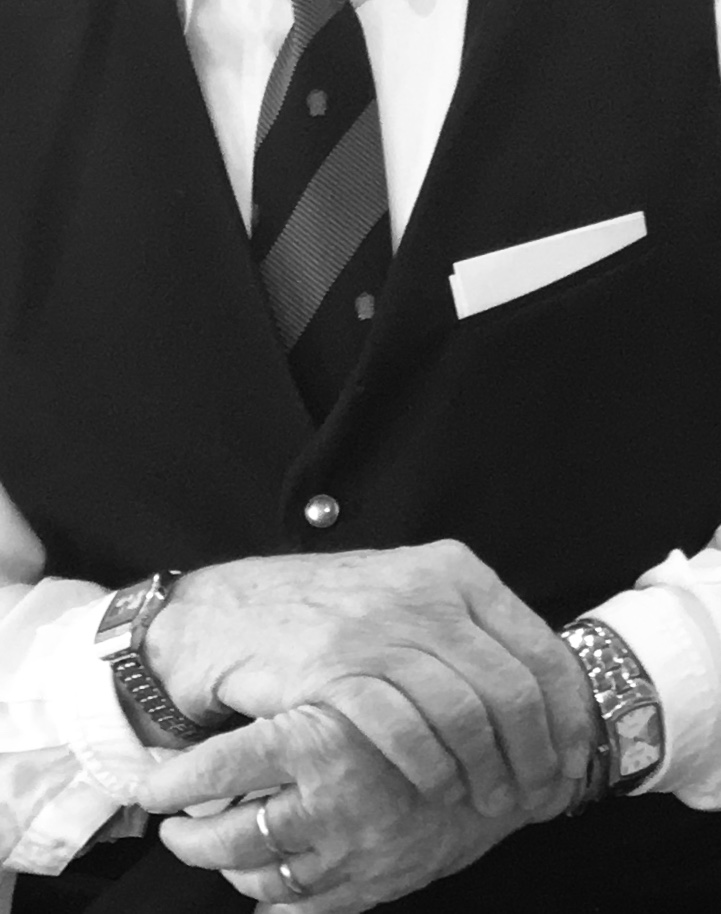 I’m fascinated by individuals who make waiting tables their profession. My forearms have balanced trays.  My fingers have pulled tap handles. And once-upon-a-time, I served cocktails and peanuts at 32,000 feet. The service industry is physically and mentally demanding, which is why a few months ago I reached out to friends, family and colleagues asking if anyone knew a career waiter.  No one raised a hand.  It seemed to prove what I’d already expected, these individuals are rare.

The chilly day I walked into Café Liebfrauenberg in Frankfurt searching for a warm meal and quiet spot to enjoy a cup of coffee, I’d accepted career waiters were like mythical creatures; something everyone has heard of, but no one has seen.

And then I met Luigi. Luigi Orelli wears his surroundings as personal accessories. Like a prop master, he understands how to manipulate space to his advantage.  It’s likely you’ll find him perched upon a midnight blue velvet upholstered chair at a bistro two top.  A crystal chandelier spotlights his undisciplined gray mane, while plush red velvet curtains drawn back with gold clasps offer a vibrant contrast accentuating the luminescence of Luigi’s pale skin. He has purposefully chosen to sit three steps above the cafe’s crowd.  He can see everything, and everyone.  And more importantly – everyone can see Luigi.

With a playful grin partially hidden below a handlebar mustache and darting coquettish amber eyes Luigi extended a tailored arm exposing anxious fluttering fingers, which pointed me to a quiet table in the back of the cafe.  The aroma of coffee peculating as I walked  past a pastry case filled with a dozen layered delicacies topped by an assortment of garnishes: cream, citrus, strawberries, cherries, singed meringue and nuts was reassuring, I was in good company. After two cups of coffee and a hearty bowl of tomato soup, it became clear why I’d been seated in the quietest pocket of the cafe. My waiter had a story he was eager to share. And after waiting tables for three decades, I’m confident he sensed I was someone willing to listen.

The folded newspaper clipping Luigi pulled from his vest pocket showed the image of a vibrant young man with a mass of untamed locks and a black mustache curling up towards earlobes.  Forty years ago he could easily have doubled as the mischievous twin of folk singer Jim Croce.  During coffee refills I learned his bold personality, pinstripe suits and signature mustache were nightclub elixirs; one discothek even bestowed him the title, “Mr. Frankfurt” in 1968.  Luigi loves Frankfurt and by all accounts, the feeling appears mutual.

Since arriving from southern Italy nearly 60 years ago, Luigi managed to amass quite a skill-set and following.  For 30 years he’s been serving locals and tourists pastries, specialty coffee and serenading diners at Café Liebfrauenberg .

After an hour in the presence of Luigi, I discovered his resume is plentiful: waiter, singer, director, actor and author.  In 2009 he published a book called, Das Leben ist ein Cappuccino (Life is a Cappuccino), the book chronicles his adventures since arriving in Germany.

At 71, Luigi continues to live with abandon.  Positive energy bursts from his seams leaving no question, he loves life and his profession.

In an Italian accent he winks and murmurs a quote from the newspaper clipping he’s handed me, “Ich Habe von Liebe, Luft, und Taschengeld gelebt”, which translates to,“I’ve lived on love, air and a bit of pocket money.”

Turns out career waiters aren’t mythical creatures, but some are legendary.